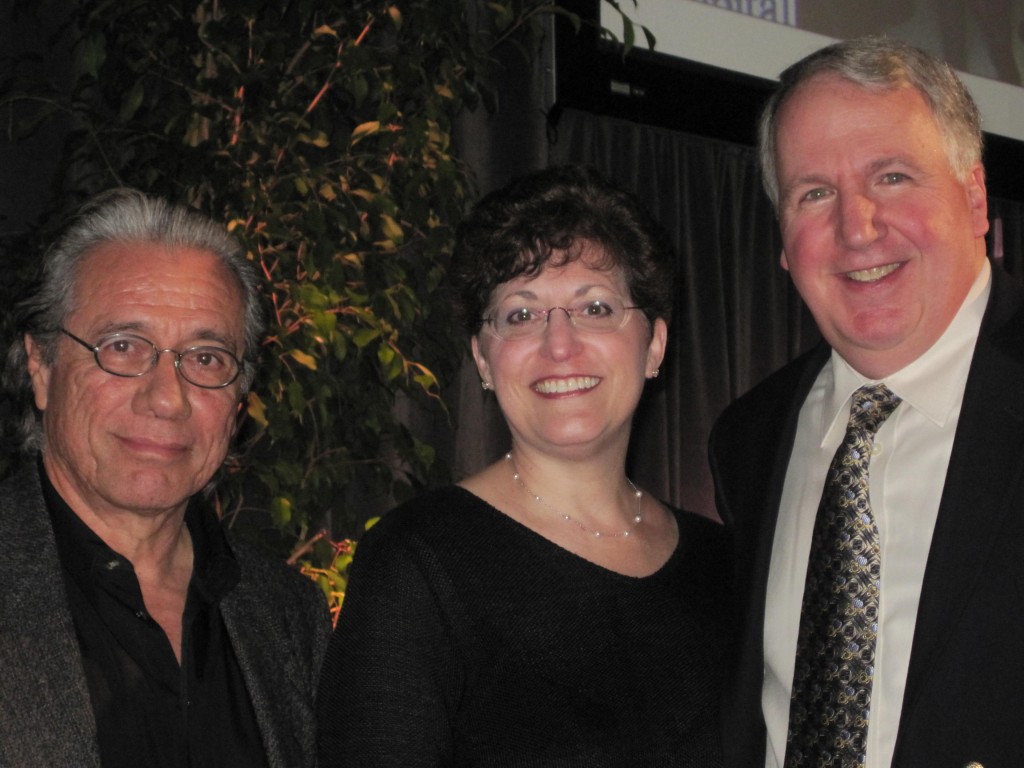 Edward James Olmos, my wife Judy and me at DFCON

Up to this point I have resisted using this blog as a “social networking” tool to just post pictures of myself lecturing someplace or another.  It has been my contention that readers of this site are interested in new science about lower extremity infections and the last thing you care to see is my visage staring out at you.  So, you will please indulge me this post.  Besides, I will still discuss some more substantive issues further down.

I was extremely honored to receive the 7th Annual Edward James Olmos Award for Advocacy in Amputation Prevention given annually at the DFCON (International Diabetic Foot Conference) Meeting held each March in Los Angeles, California. The Olmos award is named for the actor Edward James Olmos who has been active in raising awareness of the ravages of diabetes and the importance of limb preservation in the Latino community. Each year during the presentation of the award Ed relates how every male member of his family including his father and all of his uncles had either died or lost limbs as a result of diabetes. He himself has not been diagnosed with the disease but is a realist about the potential that he will eventually. For this reason he carefully watches what he eats and exercises regularly. He tells a particularly touching tale about how one of his uncles, upon learning that he would have to lose one of his legs, decided to commit suicide rather than having to face the prospect of an amputation. He has made it his mission to educate the community which has one of the highest rates of diabetes and limb amputation in the country. Each year he personally attends DFCON so that he can present the award himself. On a personal note, I should say that I found him to be the antithesis of what one expects from a Hollywood celebrity. My wife and I found him to be warm, gracious, human and a very grounded individual.

Past winners of the Olmos award have included true “Superstars” in the international world of diabetic foot disease. They have included Karel Bakker, Andrew Boulton, Gary Gibbons, Chris Attinger, Ben Lipsky and Peter Cavanaugh.  To even have been considered amongst people I have looked up to for much of my professional career is an incredibly humbling feeling. I am also the first podiatrist to win the award despite others, including Lee Sanders, Larry Harkless and Bob Frykberg being incredibly deserving.

Enough about me and the award and on to DFCON! As far as I am concerned, this meeting is the scientific highlight of the year.  It has become the largest annual international diabetic foot meeting attracting close to 1000 delegates from all 50 states and over 40 countries.  It is one of the most egalitarian meetings I attend.  It does not matter what degree you hold or in which part of the world you practice.  All are listened to and respected, there united by a conviction to save limbs in this at risk population.  Probably my favorite day of the meeting is on the first day, Thursday. During this session speakers from all over the world present information on what is being achieved in diabetic limb salvage in their countries. This year in particular there were two incredible presentations about work being done in Kosovo and Pakistan. Despite incredible hardships, healthcare providers in these two countries have managed to begin to save limbs by simply setting up diabetic foot screening centers.  Streams of these lectures will soon be posted on the meeting’s website www.dfcon.com and I highly recommend them to my readers (not to mention all of the other talks from the conference).   What I always find slightly disturbing is that the US frankly lags behind many 2nd and 3rd world countries in codifying the concept of amputation prevention and setting up dedicated centers.  If Pakistan can manage, primarily through the efforts of a single individual, Dr. Basit, to set up screening centers throughout that country, why can’t we?  Currently, in the US, there are maybe 6 true, multidisciplinary, dedicated “limb salvage” centers, the latest being the incredible facility just dedicated on the Wednesday before DFCON at Valley Presbyterian Medical Center in Van Nuys, CA.  Kudos to Dr. George Andros who has invested blood, sweat and tears to achieve this life goal.  All in the Los Angeles area owe it to themselves to stop by for a look at this state of the art center.