I just returned from a lecture trip to Turkey where I had the privilege of giving 5 talks, one in the Mediterranean resort city of Antalya at a nationwide Hospital Infection Congress and 4 to the faculties at various medical universities throughout the country. Before getting into details about specifics dealing with lower extremity infections I first wanted to say that, if you have never visited, and this was my first time, Turkey is an unbelievable country with warm, welcoming people, incredible history, scenery and great food.   Istanbul, a bustling metropolis of over 12 million people, has to be one of the great cities of Europe. 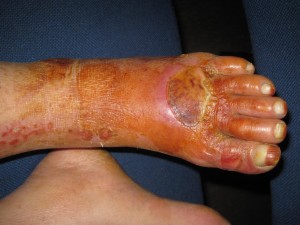 In preparation for my talks I was asked to concentrate on the importance of a team approach to amputation prevention. Having just returned from DFCON I was up to date with the latest published data and reports from around the world about the successes that true amputation prevention teams have achieved in reducing the rates of “major” amputation. I have always found it amazing, if not a bit troubling, that smaller, less developed nations can codify a network of diabetic foot centers throughout their countries more than we have accomplished here in the United States. Even Pakistan and Kosovo, as discussed at this year’s DFCON, are able to reduce amputation rates by starting these centers. Turkey has made some progress towards the goal of developing amputation prevention teams.  Just last year Yesil, et al from Dokuz Eylul University Medical Center in Izmir (a facility, unfortunately, I did not have a chance to visit) reported a reduction of major amputations after starting such a team. (Yesil S. et.al. Exp Clin Endocrinol Diabetes, 2009).  In Istanbul I was honored to meet Dr. N. Saltoglu at Cerrahpasa Medical School, Istanbul University, when I gave one of my lectures to their Infectious Diseases faculty.  Dr. Saltoglu has just recently started a multidisciplinary diabetic foot team at this large institution of >1800 beds.  They are already beginning to see positive outcomes.

During my trip I also lectured to the infectious disease faculties at Universities in the cities of Malatya and Kayseri both in the Eastern Provinces of the country.  They were very interested in the concept of starting comprehensive diabetic foot teams but were stymied by much the same turf battles and, dare I say, ego issues that we find here in the US.  Patients are treated by their local primary physicians for protracted periods before being sent to the hospital specialists.  Once admitted they are shuttled between various services including endocrinology, vascular surgery, orthopedic surgery and internal medicine with each passing the patient off to another service once their particular part of the job is completed with little coordination of effort.  The ID physicians, in particular, play a very primary role in the treatment of DFI and expressed frustration that, by the time they see the patient, it is often very late in the progression of the disease and they are dealing with infections that have received multiple, often inadequate antibiotics and now present with multi drug resistant pathogens.  The universal regret, oft expressed at DFCON, about the patient being seen too late in the progression of the disease was repeated time and time again.  It just goes to show that you can travel 5000 miles from home to a totally different culture, yet some issues are universal!

A few other thoughts and interesting findings about lower extremity infections in Turkey:

1.  MRSA is not the problem we have here.  In fact, in most hospitals the rates have been decreasing the past 5 years.  Furthermore, they do not differentiate MRSA into HA- vs. CA- strains. The common thinking is that CA-MRSA is not a widespread problem and they just do not worry about it.  This is a huge difference from here where I need to treat everybody as if they have CA-MRSA until proven otherwise.

2.  There are different antibiotics.  Whereas we use so much vancomycin for our MRSA in-patient soft tissue infections, their drug of first choice is teicoplanin.  This is another glycopeptides that, although widely used in other parts of the world, never received its US approval.  Like vancomycin, teicoplanin presents its own set of problems with dosing including having to give adequate loading dose, measuring troughs and the potential for liver toxicity. There may also be “MIC Creep” issues with MRSA and teicoplanin.  Another unique antibiotics is cefoperazone/sulbactam a β-lactamase inhibitor combination I remember reading about 20 years ago when it was thought that it might be brought into the US.  Other drugs are the same including piperacillin/tazobactam, ertapenem and imipenem.

3.  ESBLs are a major problem.  Whereas we are just now beginning to see extended spectrum β-lactamase (ESBL) producing gram negative rods here in our US diabetic foot infections, Turkey has had them for years.  In fact, there are enzymes found in Turkey that you would be hard pressed to find anywhere else in the world.   Surveillance surveys have found gram negative resistance rates to cephalosporins and even quinolones in the 50-60% range.  It is felt that some of this may be caused by the long term, inadequate antibiotic therapy that is often started by primary physicians or even pharmacists before the patient is seen by the ID specialists.  And, of course, the universal overuse of the flouroquinolones is thought to contribute.

4.  Acinetobacter, especially multi-drug resistant strains, is a problem.  I found this particularly interesting given the well documented outbreak of Acinetobacter infections that has been reported in our troops returning from the current Middle Eastern conflict.  When in some of these Eastern sections of Turkey one is not far from Iraq and Syria.  Perhaps there is something in the environment or the locale that propagates this organism. 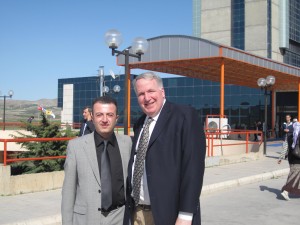