In the July 2010 issue of Consumer Reports there is a short (less than one page) “5-Minute Consult” article from the magazine’s chief medical advisor Marvin Lipman, MD entitled “Treating Toenail Fungus”. Overall, I think it is a well written and accurate piece that gives consumers some valuable information.  I do, however, find a few points on which Dr. Lipman and I would not totally agree.

1.  The article starts out by talking about all of the attention and “millions of dollars” spent each year for drug company marketing of onychomycosis in a “futile” attempt to treat the condition.  Apparently, Dr. Lipman has not been watching for direct-to-consumer (DTC) ads on TV, looking for journal advertisement about onycho products or seeing Pharma reps in his office.  If he did, he would know that there is not, nor has there been for about 2-3 years, ANY money spent on onychomycosis product advertisements at all!  All 3 FDA approved products are currently generic and no money is spent on marketing them.  I would also take exception to his classification of the treatment as “futile”.  Both clinical trials, and clinical experience showed terbinafine and itraconazole to be rather effective agents.  Even if they do not work all of the time, their use is far from futile.

2.  Dr. Lipman states that the treatment is “only occasionally medically necessary” except to prevent secondary bacterial infection particularly in diabetic patients and the immunocompromised. Despite many studies showing quality of life issues and other medical complications of onycho, the entire “cosmetic vs. medically necessary” argument has been going on for years, mainly perpetuated by the insurance companies who used it as an excuse to not pay for the drug.   It is interesting that, now that the drugs are generic and inexpensive, suddenly there seems to be little trouble getting them covered.  I guess the generic forms are medically necessary while the name brands were not.

3.  His comments on the “do it yourself” Internet market for onychomycosis products is right on target.  Although some are capable of killing fungus few if any have been subject to randomized controlled trials.  This also goes for most of those products being sold by our colleagues out of their offices. (Anecdotal testimony perpetuated by representative, i.e. “According to Drs. Smith and Jones, it works 90% of the time” does NOT equal medical evidence!)

4. Dr. Lipman’s discussion on prescription options is also mostly correct.  I would challenge his comment that a “3-month course of treatment can run up to several hundreds of dollars not including doctor’s visits and cost of tests”.  Now that these drugs are generic we are all familiar with the $4 Rx of terbinafine that many of our patients are now able to receive from discount pharmacies.  In fact, oral therapy of onychomycosis is actually quite inexpensive. The downside to his is that it has stymied any new oral therapy development since few Pharma companies want to develop a new, expensive drug to challenge such inexpensive therapy.

5. My final comment is in regard to his comment that a single laser treatment, “usually by a podiatrist, may be effective nearly 90% of the time but at around $1200 a pop”.  I find it quite interesting that Dr. Lipman is critical of prescription orals and topical and all of the anecdotal remedies holding them up to scrutiny for their lack of clinical evidence yet he mentions a 90% success rate with lasers. I need to point out that NONE of the lasers have been proven to work anywhere near the 90% mark with a single treatment and only one, the Noveon system, has any published data whatsoever.  (For full disclosure, I have been a consultant to both Nomir and Patholase).  The Noveon data just published last week by Adam Landsman, DPM, PhD and colleagues in the May/June issue of the Journal of the American Podiatric Medical Association used 4 treatments and evaluated at 180 days.  They found that 85% of the nails were improved as judged by an independent, blinded expert panel. Patholase has just completed their prospective study on the PinPointe system but it has not yet been published.

Do yourselves a favor and find the piece since you know that your patients are going to be questioning you about it! 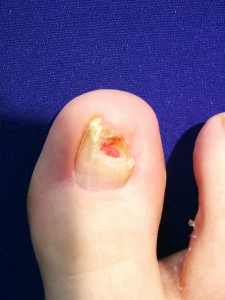 Ulceration under a mycotic nail in a patient with diabetes