Last week I was invited by Bret Ribotsky, DPM to participate in one of his “Meet the Masters” telephone conferences (www.podiatricsuccess.com).  We had an interesting conversation covering topics such as my definition of “success”, the Journal of the APMA, and my take on some current infectious diseases topics.  After the conference Bret posted a comment on PM News Online (www.podiatrym.com) asking for others’ thoughts on my comments about so-called escalation vs. de-escalation therapy for MRSA.  I felt that I should discuss my thinking on this in a bit more detail.

Traditional approaches to empiric antibiotic selection suggests that you should chose the narrowest spectrum antibiotic against the organisms you suspect are causing the infection.  This, of course, would then be modified based on definitive culture results (if obtained) and the patient’s clinical response. Until relatively recently I would NOT have included MRSA coverage in my empiric selection for most patients.  I believed that beginning therapy against MSSA would be, for most cases except the most severe life and limb threatening infections, sufficient and then, if MRSA was cultured I could always ESCALATE therapy to include MRSA coverage.  My thinking on this approach starting changing about a year or so ago when I was called in to see a patient in our Emergency Department.  This 36 y/o healthy male had no history of any hospitalizations and related not remembering ever taking any antibiotics.  He had dropped a trash can on his foot at work and thought nothing of it until the 1st MTP joint started becoming hot, red and painful.  During the History, I even specifically asked him “Have you or any of your family members ever had MRSA”.  Now, you pretty much have to be living under a rock not to have heard about MRSA given all of the press coverage.  His answer to me was a simple “What’s that”.  With this History and that response I turned to the Resident and basically stated that I would “eat my hat” if this guy has MRSA.  We started him on non-MRSA coverage.  Well, I think you can imagine what happened.  48 hours later the C&S was returned as CA-MRSA (Picture below is from after initial I&D by my podiatric surgical colleague).  From this point on I have started to practice DE-ESCALATION therapy.  I start the vast majority of my patients, particularly those being hospitalized, as if they have MRSA and will de-escalate to remove the MRSA therapy if MSSA or no staph is found.  Frankly, I don’t remember the last time I was even ABLE to de-escalate.  That is how prevalent MRSA is in our local hospital. 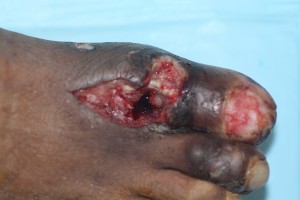 Now, this is NOT to say that my approach is appropriate in every clinical setting and every community.  In the outpatient setting in a locale with a relatively low MRSA rate, you can still begin coverage as if there is only MSSA and switch if the patient does not respond.  Notice I said, “NOT RESPOND” and not, “what the culture report says”!  I continue to believe that patients should be treated, not lab results.  Many studies have shown that, for most uncomplicated skin and skin structure infections, I&D without antibiotic therapy is still an appropriate approach to an abscess caused by MRSA.  If you want to escalate to anti-MRSA therapy then I do believe that doxycycline or minocycline is preferred over trimethoprim/sulfamethoxazole (TMP/SMX).  The reason for this is the significant rate of adverse events found in TMP/SMX and the lack of clinical evidence supporting it.  (I will try to cover this in a future post.  I do cover it in the 3rd Edition of the Handbook)