The more I read the infectious disease literature the more my diet becomes limited. It seems that new reports of contaminated food are published regularly.  It gets to a point where you don’t know what you should and should not eat!  I have always been wary of raw foods and rarely eat sushi especially after an article was published in Clinical Infectious Diseases a number of years ago complete with pictures of the worm coughed up by a patient who ate salmon sushi (I apologize for not being able to find the reference and to those of you who love to eat sushi, it’s just not for me). But even cooked foods I thought would be safe are suspect.  Take for example the report I read back in 1998 of a botulism outbreak from baked potatoes that were wrapped in foil. (PubMed: http://www.ncbi.nlm.nih.gov/pubmed?term=baked%20potato%20food%20poisoning ). More recently there has been the incredibly deadly Shiga toxin producing E. coli outbreak centered in Hamburg and Lubeck, Germany, the mystery fortunately solved one week before my wife and I visited both of those wonderful cities on vacation.  If these examples weren’t enough to cause consternation, consider two papers published in the July 15, 2011 issue of Journal of Infectious Diseases. This first is an Editorial Commentary by Daniel Bausch: Ebola virus as a foodborne pathogen? Cause for consideration, but not panic.   EBOLA VIRUS!!??  That deadly organisms from Africa that kills 90% of all whom it infects?  In food?  Fortunately, there really is no reason for panic.  The author discusses how a variant of the virus, known as the Reston EBOV, which is not known to be pathogenic in humans, has been found in pigs in the Philippines…but, still…

A second article in the same issue by Behravesh, et al; Deaths Associated with bacterial pathogens transmitted commonly through food, is an analysis of the Foodborne Diseases Active Surveillance Network (FoodNet). Fortunately, death from foodborne illness remains relatively rare, reported at just 0.5% of cases with most being in adults >65.  Salmonella and Listeria were the most common causes followed closely by Vibrio, which brings us to the following:

I have always been fascinated by infections caused by various Vibrio species found primarily in raw oysters.  Early in my ID career I attended the Interscience Conference on Antimicrobial Agents and Chemotherapy (ICAAC) one of the great antibiotic and microbiology meetings, when it was held in New Orleans in 1986.  3 years later a study was published by Lowry, et al, in Journal of Infectious Diseases which reported on Vibrio gastroenteritis in attendees of the meeting who ingested raw oysters (PubMed: http://www.ncbi.nlm.nih.gov/pubmed/2584764). The authors found that 12% of respondents reported diarrhea and the risk was significantly higher in those who ate raw or cooked oysters. Furthermore, they found that cultures of raw and cooked seafood at local restaurants yielded 5 different species of Vibrio!  Searching of PubMed reveals outbreaks of this type reported with oyster consumption from all over the world including different locales in the US.  Fortunately, I seem to remember the University of Louisiana did do a study and found that the use of Tabasco sauce was protective against infection (again, I apologize but I cannot find the reference either in my files or doing a PubMed search).

By this point, you may be wondering what any of this has to do with the lower extremity. Vibrio species, in particular V. vulnificus has the ability to cause rapidly progressive, frequently fatal necrotizing infections of the lower extremity in two ways.  First, direct inoculation of the organism into the soft tissues has been reported when marine water comes in contact with an open wound or if someone cuts themselves on a contaminated item in the marine environment (now, not only do I have to watch what I eat but I avoid swimming in the ocean too! ). But, the more common and deadly infection occurs after a patient ingests infected seafood and develops a Vibrio bacteremia and septicemia which then causes severe necrotizing skin and soft tissue infections.  A recent review by Horseman et al in the International Journal of Infectious Diseases (PubMed: http://www.ncbi.nlm.nih.gov/pubmed/21177133) reports a mortality rate exceeding 50%.  The authors opine that the antimicrobial regimen of choice is doxycycline combined with ceftazidime and aggressive surgical debridement.  Another study from just this year published by Tsai, et al in the American JBJS (PubMed: http://www.ncbi.nlm.nih.gov/pubmed/21266641) compares necrotizing infections by V. vulnificus and MRSA and finds the Vibrio infection progresses more rapidly and can be more deadly. They declare it to be a “surgical emergency”.

This case photograph was sent to me by Desmond Bell, DPM, CWS, a top podiatric wound authority and co-founder and Executive Director of the Save A Leg, Save a Life Foundation (SALSAL,  http://www.savealegsavealife.org/) I have known Des since his days as one of my students and have lectured a number of times at the SALSAL scientific meeting being held this year in Orlando October 27-30, 2011.  He received the photo courtesy of a colleague of his, Michael Baxley, MD.  The photograph shows a food wound in a patient who had developed Vibrio sepsis after ingesting oysters in coastal Alabama.  The patient fortunately survived the sepsis but now has skin wounds of varying severity on his hands, legs and feet. 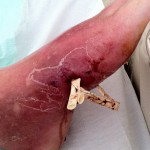 Perhaps I should have written this post earlier in the summer season, before many of you went on vacation to the seashore…but then again, maybe not.