Two studies published in the January 7, 2010 issue of the New England Journal of Medicine have received a tremendous amount of play in the popular press.  One paper out of Baylor in Houston looked at comparing chlorhexidine + alcohol vs. povidone iodine as a preoperative surgical prep.  In a total of 849 subjects in the ITT analysis they found that the surgical site infection rate was significantly lower with the chlorhexidine + alcohol than it was with the old “standby” povidone iodine (9.5% v. 16.1% P=0.004) Here is a link to that abstract http://content.nejm.org/cgi/content/short/362/1/18.

The second study, out of the Netherlands, explored the issue of decolonization in nasal carriers of S. aureus.  http://content.nejm.org/cgi/content/short/362/1/9.  A total of 6771 patients were screened on admission using PCR for rapid identification of the Staph.  1270 swabs were positive, 808 underwent a surgical procedure.  The patients were all treated with mupirocin nasal ointment and chlorhexidine soap vs. a placebo.  The rate of S. aureus infection was 3.4% in the treated group vs. 7.7% in the placebo group.    Interestingly, ALL were methicillin susceptible (MSSA) so the study may, or may not be able to be extrapolated to MRSA carriage.

Hospital acquired infections, particularly surgical site infections cause a tremendous amount of morbidity and mortality not to mention costing billions of dollars to treat.  The monetary situation is complicated by CMS guidelines that may not pay a hospital for treatment of any nosocomial infection.  Therefore, new and improved techniques for minimizing these infections are being studied.  Some of what is done today for infection prevention in the surgical suite has not changed much in decades i.e. the use of the povidone iodine prep.  I remember doing those back when I was a surgical resident in the early 1980s!  Chlorhexidine is by no means a new product.  In fact, it may be older than povidone iodine.  A quick PubMed search finds papers going back to the 1960s.  More recently, the combination of chlorhexidine with alcohol has shown to be a better antiseptic with longer activity than chlorhexidine alone.  This is true not only for prepping the patient but also as a hand prep for the physician.  This recent study just shows us that as new high level evidence becomes available, we may have to change some very ingrained thoughts and practices.

As for the nasal carriage paper, I find that interesting and not unexpected.  What needs to be looked at is carriage of MRSA and surgical site infections.  There are some papers out there and I do discuss them in the book.  This is a more involved topic for another post. 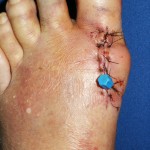